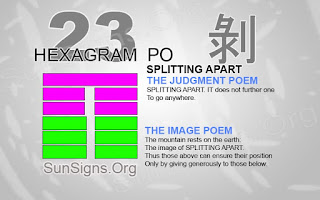 1. Mountain sitting on the earth
a) In whatever you do expect little movement, except when ensuring the plans of others
b) Thus there is no advantage in whatever direction movement is made unless you are just lucky, the four-leaf clover

1. Again, now is not a good time to cross the great river, in plain words, there will be going and coming with some loss. The hexagram has more to do with that bad dream you had last night, and trust me, I know you did. As the hexagram denotes while one is asleep there is an attempt to saw one of the legs of the bed by a prankster, hence, interference of sleep or a bad dream so to speak. I did too. The core of your body is at work doing homeostasis at that time. That could be the reason for the hexagram's warnings against any kind of activities at this time. Most hexagrams have the effects of three days before, and three days after, an indicated change. In three days there are two things about to happen, an eclipse and the spring equinox. Remember, that there is no success in seeking any destinations at this time. The weak prevail over the strong and correct. The superior person recognizes the effects of time and adheres to the fact that at this time within this continuum, the inferior men will at this time be predominating. (Update 7-8-2019) Splitting apart sort of reminds one of an EarthQuake. It recalls the situation of the bell curve and degrees of movement, in this incident, there are three days before and three days after the main event.