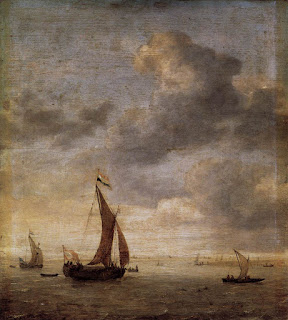 A. Hexagram eighteen is related directly with Decay. Another variation is the idea of Fixing or working on that which is decaying or that which is spoiled, or we can say, when the sailboat is not out at sea, work on the sails because due to weather the sails will, over time, rot or decay:

1. The wind blows low on the mountain
a) The image of Decay
b) Thus, the superior man stirs up the people, this strengthens their spirit.

A. Work on that which is spoiled has something to do with a person's character (heredity and/or psychological traits) which has run aground from that of the norm. This can be seen in how that person might threat his fellow man, that is, in terms of respect. If a person sense this happening within their persona it is time to pullback and fix the internal workings of their personality. One word, meditation, that would be the key word if one wanted to create a better reflection of their subconscious.

1. Now is the perfect time to cross the great river, in plain words, it is time to follow through with those long-term strategic plans. Pay close attention to the three days before, and three days after the starting point, which is now. The picture I gathered today was, while clearing a flowerpot of old dead annual plants, there was a perennial seedling sprouting up. So, with that image we see after clearing the decayed plants away there appears amount the dead new life, renovation. Now also remember there is implication of there being a windy day today as well. Remember, do not be over expressive, think and internalize what enunciation is appropriate to bring forth. Abuse of power is indicated.